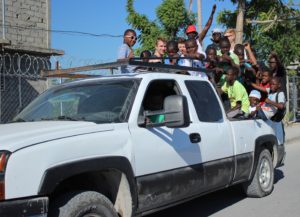 From some assembly line in 2005 to Haiti in 2017. I wonder if the assemblers in the factory ever think about the adventures the vehicles they build may end up on. Vehicles develop a personality – some of us even name them! A few of them live brief but exciting lives, others live on long after those who assembled them pass into eternity. I wish I could tell the people that made this 2005 Chevy Silverado that their hands became part of God’s mission.  Back in 2005, possibly on a day some would rather have not been inside on the assembly line, you did well the job set out before you.

Twelve years later the product of your fine work :

The Big White Truck is now a fixture at Accolade for Saving Lives. It has a removable steel rack that allows for transportation of wood for projects, securing of luggage and items during travel to / from the airport, and safe transportation of the ASL program youth and staff. In fact, it is much like a Haitian “tap-tap” during outings and field trips! In Haiti you can hop onto a truck very similar to this when you need to get somewhere. When you near the location you desire to stop, you simply tap on the side of the truck and it will stop to allow you to get off.

Big White comes to ASL as The Great Green 4-Runner approaches nearly 300,000 miles, most accumulated upon the challenging terrain of Haiti. The Great Green will remain, but is now allowed the short distance travel and light duty work she deserves in her golden years.

We look forward to the many projects and adventures having a truck will afford us at ASL. We value greatly the safety it provides in transporting Patchouko’s family and visiting teams to and from Port Au Prince. We thank all of you that prayed for, paid for, and donated items to this blessing!

Philippians 4:19 tells us “And my God will supply all your needs according to His riches in glory in Christ Jesus”. Indeed, it is true. He proves it time and time again.

Previous StoryCLIMB – Exactly what does that stand for?
Next StoryHappy Anniversary Accolade for Saving Lives!